On January 3rd, 2005, 2H Mechanical LLC opened its doors for business. 2H Mechanical is a well-funded and well-planned full-service Mechanical Contractor focusing on offering a more professional business partnership to the General Contractors servicing the Western Slope of Colorado and surrounding areas. We are also currently licensed to work in North Dakota and Montana. Please see our website at www.2HMech.com for more information, pictures and contacts. This document is to help our potential customers understand how we are qualified to partner with them on construction projects.

In March 2018, 2H Mechanical moved to our new facility at 757 Valley Ct. a 15,000 square foot facility with a 4,800 spare foot storage tent. The new facility allowed us to upgrade our shop with a JWT coil line and a Namcore Spiral machine. This makes us the largest sheet metal fabrication facility between Denver and Salt Lake. We now provide sheet metal to other specialty contractors in the area.

We have also started hiring graduates and interns with an eye on the future. We have extended our training program to include foreman upgrade training to build the leaders we need; the best way to ensure the future of the company is to train the future owners. 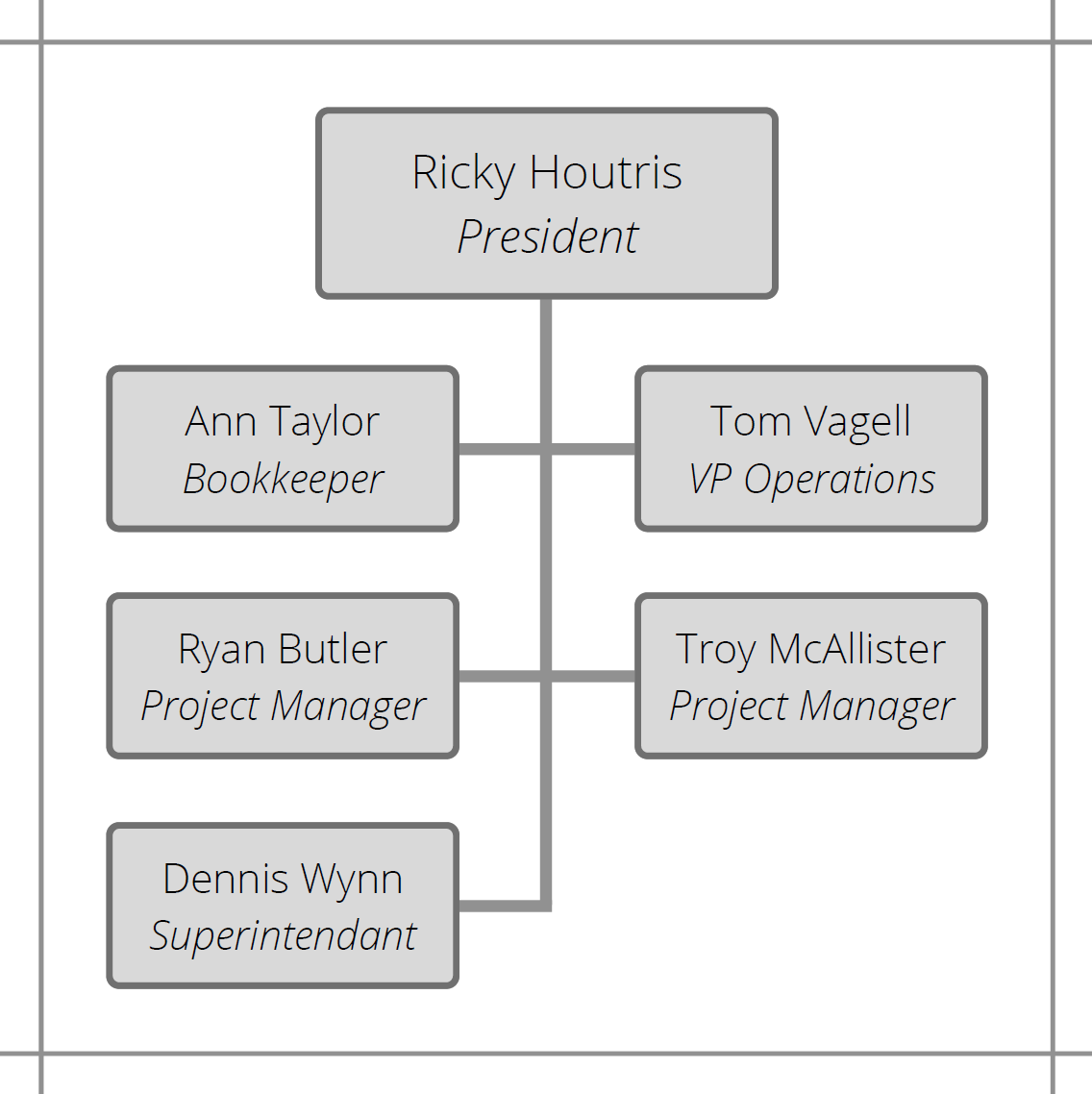 The management team has developed processes and procedures within a paperless office environment called DocSavy to assist and empower the job foremen and service techs to fulfill the day-to-day requirements of a project from any location. For more information about this product, please see www.DocSavy.com. We are also in the process of developing LogSavy to manage equipment maintenance coming soon at www.LogSavy.com. 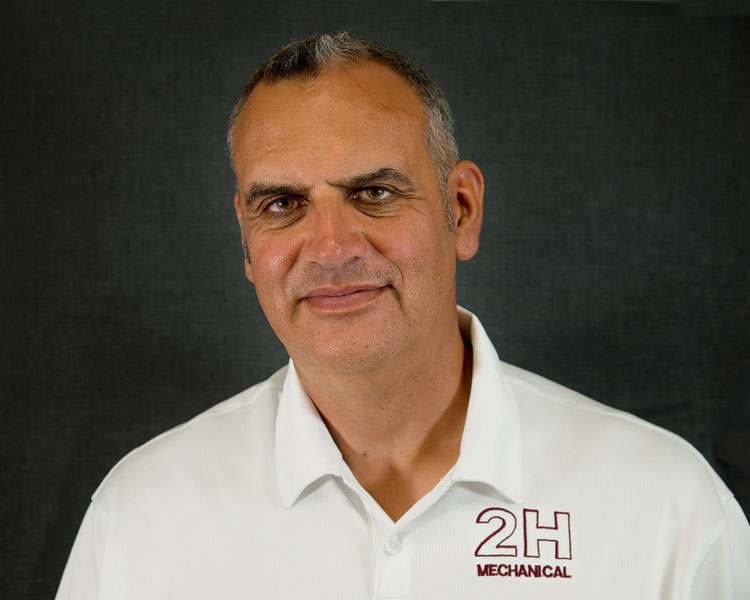 Ricky Houtris, an Englishman, grew up around a family business of plumbing and heating. Despite this, at the age of 16 Ricky took a 4-year apprenticeship in automotive repair, during which time he attained City & Guilds, TEC and BTEC diplomas. After 6 years in the trade he returned to the family business for a couple of years before deciding to further his education. Ricky received an honors degree in Mechanical Engineering at the South Bank University in London, England where he achieved an upper second.

Once he graduated, Ricky took a job as a Mechanical Engineering troubleshooter working in the Construction, Food and Nuclear power industries – to name a few. After a couple of years Ricky took a job as a Finite Element Analyst in an engineering services company that was later acquired and renamed to MSX International. He worked at MSX for eight years, stationed across five countries, including a business start-up in Spain and a department start-up in the US. In Detroit Ricky built the largest independent CAE team outside of the OEMs, (Original Equipment Manufacturers), with sales in excess of $12M. At peak, the team was over 60 strong. Ricky was then hired as Engineering VP at Wagon Engineering running a 200-plus engineering division with $25M annual sales. The changing customer requirements in the automotive sector reduced the value-add of managed engineering services, and his position along with it .

At that point Ricky decided to move to the Grand Valley and set up 2H Mechanical LLC with Phil Herrera and Tom Vagell. To streamline the communications systems with 2H Mechanical, Ricky has developed a document management system called DocSavy to allow foremen to access and enter documentation on jobsites in remote locations. For more information, see DocSavy.com. 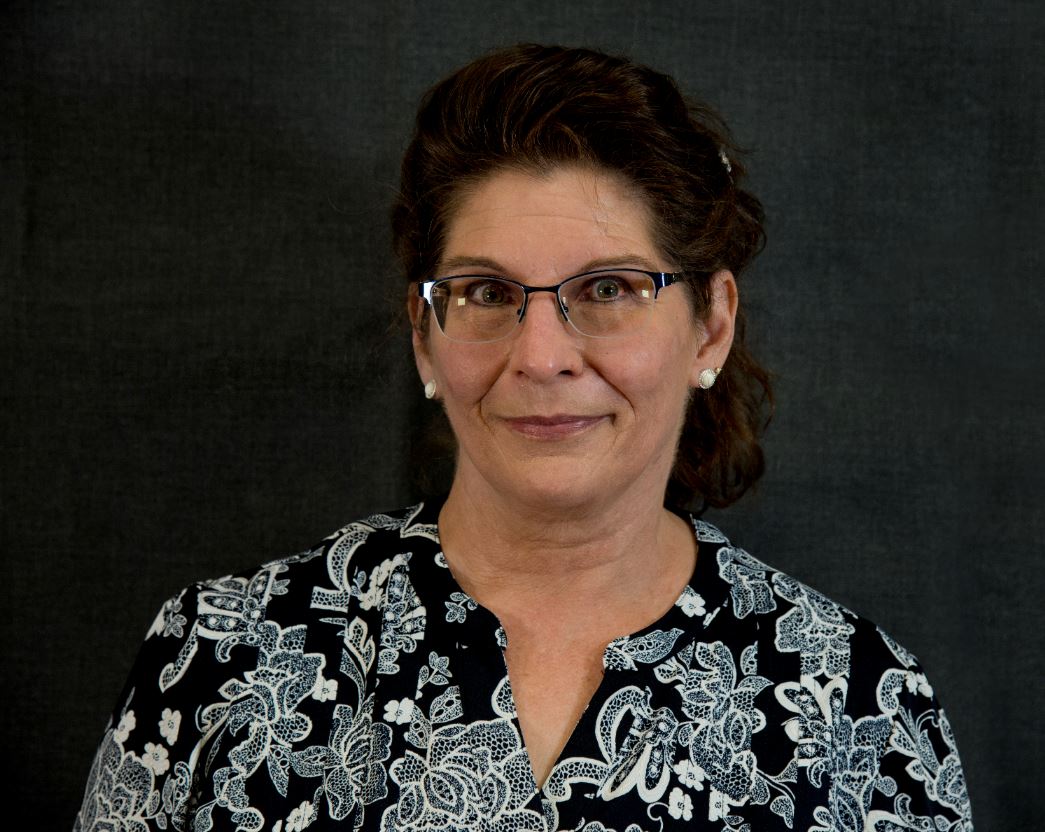 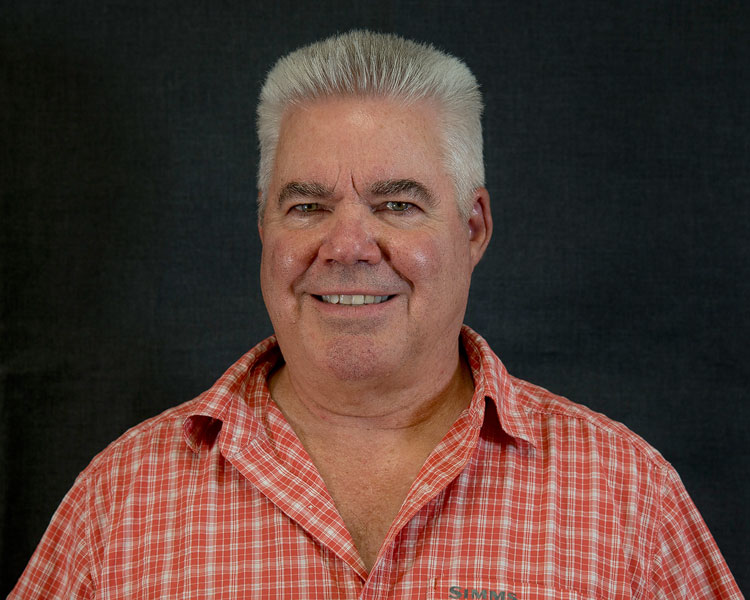 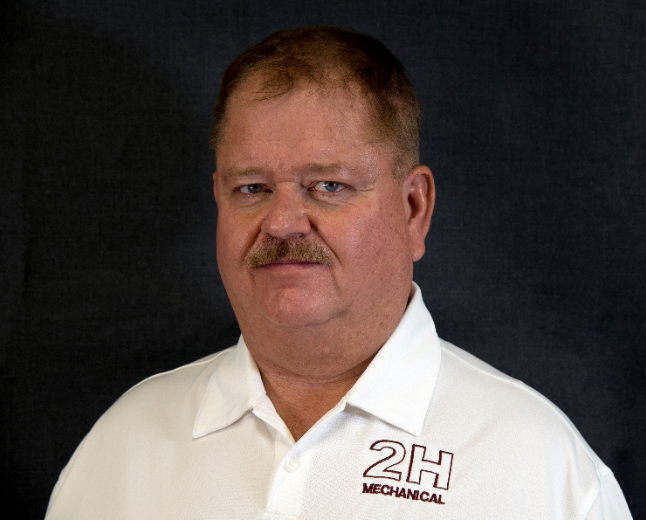 Troy McAllister is an accomplished Project Manager with experience managing diverse projects in a variety of locations both as a mechanical contractor and as a general contractor.

Troy was born in Colorado Springs and lived there through school when he moved to Craig, Colorado and worked on the initial startup of Colorado-Ute Electrical Association’s Craig station’s 550 Megawatt coal fired power plant units. Troy started a United Association Apprenticeship in 1982, obtaining a Colorado Master Plumber’s license in 1985, and worked on the completion of Craig Station Unit 3 before joining the family mechanical business where he worked on and managed plumbing, HVAC, mechanical, and fire protection work until 1995. Troy performed on US Army Corps of Engineers and other government projects, managing mechanical work in Hawaii, Kwajalein RMI, and Diego Garcia. Troy has also managed multiple general contract projects for radar facilities, missile silos, and other critical infrastructure through 2007. In mid 2007 Troy joined FCI Constructors, Inc. where he familiarized himself with the construction market in Grand Junction and the Western Slope.  Troy has managed construction of K-12 education facilities, medical office buildings, hospitals, municipal buildings, welding fabrication facilities, convenience and grocery store facilities, and aircraft hangar/terminal facilities. Troy has also performed work for high tech companies in cleanrooms and data centers for clients like Hewlett Packard, Qualcomm, Broadcom and Ball Aerospace. Among other things Troy exhibits his passion for safety and compliance as the Corporate Safety Manager. 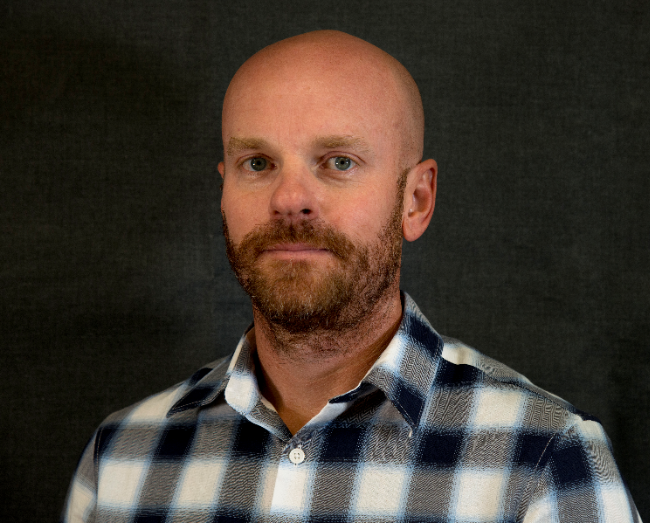 Ryan Butler, a native of Grand Junction, has over twenty years’ experience in construction. He served a non-union sheet metal apprenticeship through Associated Builders and Contractors (ABC) of Western Colorado. He also spent four years as a Shop Foreman learning fabrication and layout. In 2008 Ryan joined the union working on the St. Mary’s Century Tower. Ryan spent the next four years traveling the state of Colorado working in schools and hospitals (both remodel and new construction). While in the union he received numerous training upgrades and classes pertaining to the sheet metal industry such as; Safety (Osha 10 & 30), Welding Certifications (MIG, TIG, Stick, Flux Core), and Journeyman/Foreman Upgrade Classes. In 2013 Ryan went to work at 2H Mechanical. Ryan started there as a Foreman and completed numerous projects such as Canyon View Medical Center, Gunnison County Courthouse Remodel, The Avalon Theater Remodel, Tomlinson Library Remodel, and Glenwood Springs Elementary School Remodel to name a few. Over the past few years, Ryan has been continuing his education through CSU Global. In 2019 Ryan was brought into the office to train as an estimator and work as a Field Superintendent, but quickly took on the role of Project Manager and has become an integral part of the 2H Mechanical Management Team. 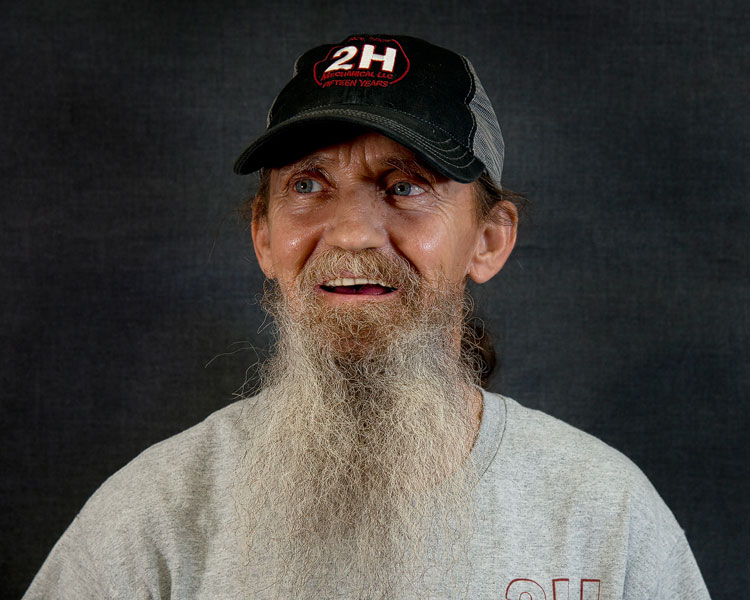 Vincent ‘Vinny’ Darnell has been a sheet metal worker since 1986. Vinny worked in the field for a few years learning his trade; he then found his way into the shop, and knew that was where he was meant to be. Vinny is just one of those guys who can make anything, he also has a great knack for teaching others! By 1991, Vinny was shop foreman and he never looked back. He joined 2H in 2005 as shop manager. Vinny has the organizational and leadership skills to run the 2H shop so that we can deliver more duct than shops of twice our size. He is the company authority on fabrication and installation to SMACNA standards. Vinny also orchestrates all deliveries that pass through the shop. If that wasn’t enough, Vinny keeps 2H running smoothly by maintaining and delivering all the tools we need to get the job done efficiently.

2H Mechanical are proud to have built a working relationship with US Engineering to provide plumbing pre-fabrication services. This service complements our sheet metal pre-fabrication capabilities and allows 2H to be more efficient and safe on the job-site. Pre-fabrication can be used in isolation giving other trades passing zones, through complete 3D coordination, to a complete BIM process, depending on the project requirements.

Mechanical contracting is a hugely cyclical business where the manpower requirement will vary dramatically throughout the year. The lack of adequate training facilities within the Grand Valley makes the delivery of large projects a challenge. With this in mind, 2H Mechanical has built good relationships with the Plumbers & Pipefitters – Local #145 and the Sheet Metal Workers’ Local #9 to deliver our large project plumbing and mechanical needs.

With a staff of 10-65 and over $80M billing in the first 13 years of business, the strategy is certainly on-track. Providing the resources required to deliver your project on time and within budget may well involve bringing more skilled staff to the area, and 2H Mechanical is the only local contractor that can draw from both the plumbing and sheet metal unions’ extensive and well-trained pool of skilled workers.

2H Mechanical banks with the Bank of the San Juans, with advisement from Jennifer Landini, VP & Senior Commercial Loan Officer. The company has a $250K L.O.C.

2H Mechanical makes safety its highest priority. All field staff have a minimum of 10-hour OSHA and SDS training along with weekly on-site safety meetings. We do our utmost to ensure that our employees have the right tools and equipment to work efficiently and safely. Our current insurance experience premium modifier is 0.9.

We like to think that accidents never happen, but they do. 2H Mechanical has worker’s compensation, general liability, vehicle and an umbrella policy to ensure that you never have to claim on your policy, should anything go wrong.