On January 3rd 2005, 2H Mechanical LLC opened its doors for business. 2H Mechanical is a well funded and well planned full service Mechanical Contractor focusing on offering a more professional business partnership to the General Contractors servicing the Western Slope of Colorado and surrounding areas. We are also currently licensed to work in North Dakota and Montana.

Please see our website at www.2HMech.com for more information, pictures and contacts. This document is to help our potential customers understand how we are qualified to partner with them on construction projects. 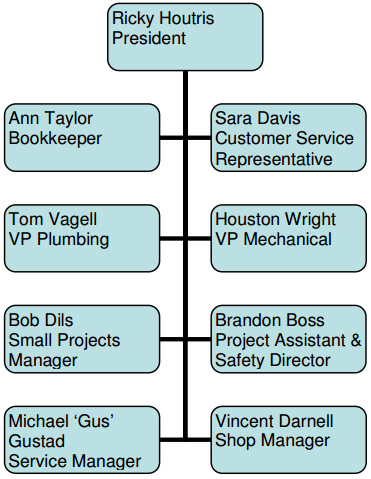 The company is organized into six cost centers: Corporate, Mechanical, Plumbing, Small Projects, Service, and Shop. Phil and Ricky are dedicated to corporate functions and oversight of the company. Mechanical and Plumbing are the departments that deliver large projects. The shop provides all fabrication for all departments as well as managing all shipping and tools for the company. Small projects delivers all light commercial and small residential projects including retrofit work. Service provides all periodic maintenance and service calls for our customers.

The management team has developed processes and procedures within a paperless office environment called DocSavy, to assist and empower the job foremen and service techs to fulfill the day-to-day running of the projects from any location. For more information about this product, please see DocSavy.com.

Ricky Houtris, an Englishman, grew up around a family business of plumbing and heating. Despite this, at the age of 16 Ricky took a 4-year apprenticeship in automotive repair, during which time he attained City & Guilds, TEC and BTEC diplomas. After 6 years in the trade he returned to the family business for a couple of years before deciding to further his education. Ricky took a Mechanical Engineering honors degree at the South Bank University in London, England where he achieved an upper second.

Once graduated, Ricky took a job as a Mechanical Engineering troubleshooter working in the Construction, Food and Nuclear power industries – to name a few. After a couple of years Ricky took a job as a Finite Element Analyst in an engineering services company that was later acquired and renamed to MSX International. He worked at MSX for eight years, across five countries. Posts included a business start-up in Spain and a department start-up in the US. In Detroit Ricky built the largest independent CAE team outside of the OEMs, (Original Equipment Manufacturers), with sales in excess of $12M. At peak, the team was over 60 strong. Ricky was then hired as Engineering VP at Wagon Engineering running a 200-plus engineering division with $25M annual sales. The changing customer requirements in the automotive sector reduced the value-add of managed engineering services and thus his position.

At that point Ricky decided to move to the Grand Valley and set up 2H Mechanical LLC with Phil and Tom. To streamline the communications systems with 2H Mechanical, Ricky has developed a document management system call DocSavy to allow foremen to access and enter documentation on jobsites in remote locations. For more information, see DocSavy.com.

Tracy ‘Houston’ Wright, a Utah native, began his sheet metal career in 1980 and completed his apprenticeship with the sheet metal workers’ union, local #312 in SLC, UT. Houston became a foreman for General Electric Environmental Services at the Delta Power Plant successfully managing composite crews consisting of both sheet metal workers and iron workers which had never been attempted prior. He continued his career at a foreman capacity while concurrently attending college and received a MBA – Masters of Finance in 2004. After graduation, Houston accepted a HVAC teaching position with Decker College, Louisville, Kentucky. Houston later took a 1-year elementary teaching position in Ildong, S Korea. In 2006 Houston came back to the states and work in the HVAC field. In 2008 he took a position as an HVAC sale /estimator for R&H Mechanical in Eagle, Colorado. In 2012, he launched a HVAC Division for Ashcraft Mechanical and in 2013 for TLC Plumbing, both in Albuquerque, NM. During this period, he managed many projects including the Albuquerque Academy and the Spaceport America in Truth or Consequences, NM. In 2014, Houston came aboard with 2H Mechanical as VP Mechanical and protégé for Mr. Herrera.

Brandon Boss is a western slope native, who grew up in Nucla, CO. He attended Western State Colorado University for a few years on a sports scholarship after high school and then transferred to Colorado Mesa University in 2001. After graduating from CMU in 2004, Brandon began his professional career in manufacturing, working for Reynolds Polymer Technology as a resource planner/project manager. He worked on many large national & international projects, including the Cleveland Clinic Heart Center-Water Feature, and the Morroco Mall Aquarium. In 2011, he began working as an operations manager for a manufacturing company, FiberForge, based out of Glenwood Springs, CO. They specialized in producing carbon-fiber parts for the automotive and aerospace industries as well as prototyping machines for customized carbon fiber layouts. In 2013, FiberForge lost one of their major contracts and was forced to close its doors. Shortly after, Brandon began working in the oil & gas industry for Halliburton as a drilling fluids engineer and did so up until last years’ local crash. In 2016, Brandon came aboard to help aid 2H Mechanical as project assistant for their commercial division.

Bob Dils is an Indiana native who has lived on the western slope since 1993. Bob joined Mountain Air Mechanical, Inc in Rifle 2003. He quickly moved into a lead position, then spent time in the Service Department before moving to sales in 2004. Bob is a very organized and motivated HVAC Salesman with strong work ethic. He has excellent experience in system installation, replacement and repair focused on delivering quality work and exceptional customer service. Bob also has strong knowledge of technical data, including schematics, blueprints and detailed specifications. He prides himself in being friendly and hardworking along with being an excellent problem solver that is extremely detail oriented.

Gus Gustad has over 40 years of HVAC-R experience. Gus has been a member of the Refrigeration Service Engineers Society since 1983. His training highlights include:

Vincent ‘Vinny’ Darnell has been a sheet metal worker since 1986. Vinny worked in the field for a few years learning his trade; he then found his way into the shop, and knew that was where he was meant to be. Vinny is just one of those guys who can make anything, he also has a great knack for teaching others! By 1991, Vinny was shop foreman and he never looked back. He joined 2H in 2005 as shop manager. Vinny has the organizational and leadership skills to run the 2H shop so that we can deliver more duct than shops of twice our size. He is the company authority on fabrication and installation to SMACNA standards. Vinny also orchestrates all deliveries that pass through the shop. If that wasn’t enough, Vinny keeps 2H running smooth ly by maintain and delivering all the tools we need to get the job done efficiently.

Mechanical contracting is a hugely cyclical business where the manpower requirement will vary dramatically throughout the year. The lack of adequate training facilities within the Grand Valley makes the delivery of large projects a challenge. With this in mind, 2H Mechanical has built a good relationship with the Plumbers & Pipefitters – Local #145 and the Sheet Metal Workers’ Local #9 to deliver our large project plumbing and mechanical needs.

With a staff of 10-65 and over $65M billing in the first 11 years of business, the strategy is certainly on-track. Providing the resources requirements to deliver your project on time and within budget, may well involve bringing more skilled staff to the area. 2H Mechanical is the only local contractor that can draw from both the plumbing and sheet metal unions’ extensive and well trained pool of skilled workers.

2H Mechanical banks with the Bank of the San Juans, with advisement from Jennifer Landini, VP & Senior Commercial Loan Officer. The company has a $250K L.O.C.

2H Mechanical makes safety one of its highest priorities. All field staff have a minimum of 10-hour OSHA and SDS training along with weekly on-site safety meetings. We do our upmost to ensure that our employees have the right tools and equipment to work efficiently and safely. Our current insurance experience premium modifier is 0.9.

We like to think that accidents never happen, but they do. 2H Mechanical has worker’s compensation, general liability, vehicle and an umbrella policy to ensure that you never have to claim on your policy, if anything goes wrong.